CHAPTER THE LAST: Out of Bondage.—Paying the Captive.—Yours Truly, Huck Finn. 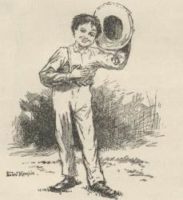 This is Chapter 43/ Chapter the last of Huckleberry Finn. This librivox recording is in the public domain. Adventures of Huckleberry Finn by Mark Twain, Chapter 43/ Chapter the last: Out of Bondage.—Paying the Captive.—Yours Truly, Huck Finn.
THE first time I catched Tom private I asked him what was his idea, time of the evasion?—what it was he'd planned to do if the evasion worked all right and he managed to set a nigger free that was already free before? And he said, what he had planned in his head from the start, if we got Jim out all safe, was for us to run him down the river on the raft, and have adventures plumb to the mouth of the river, and then tell him about his being free, and take him back up home on a steamboat, in style, and pay him for his lost time, and write word ahead and get out all the niggers around, and have them waltz him into town with a torchlight procession and a brass-band, and then he would be a hero, and so would we. But I reckoned it was about as well the way it was.
We had Jim out of the chains in no time, and when Aunt Polly and Uncle Silas and Aunt Sally found out how good he helped the doctor nurse Tom, they made a heap of fuss over him, and fixed him up prime, and give him all he wanted to eat, and a good time, and nothing to do. And we had him up to the sick-room, and had a high talk; and Tom give Jim forty dollars for being prisoner for us so patient, and doing it up so good, and Jim was pleased most to death, and busted out, and says:
"DAH, now, Huck, what I tell you?—what I tell you up dah on Jackson islan'? I TOLE you I got a hairy breas', en what's de sign un it; en I TOLE you I ben rich wunst, en gwineter to be rich AGIN; en it's come true; en heah she is! DAH, now! doan' talk to ME—signs is SIGNS, mine I tell you; en I knowed jis' 's well 'at I 'uz gwineter be rich agin as I's a-stannin' heah dis minute!"
And then Tom he talked along and talked along, and says, le's all three slide out of here one of these nights and get an outfit, and go for howling adventures amongst the Injuns, over in the Territory, for a couple of weeks or two; and I says, all right, that suits me, but I ain't got no money for to buy the outfit, and I reckon I couldn't get none from home, because it's likely pap's been back before now, and got it all away from Judge Thatcher and drunk it up.
"No, he hain't," Tom says; "it's all there yet—six thousand dollars and more; and your pap hain't ever been back since. Hadn't when I come away, anyhow."
Jim says, kind of solemn:
"He ain't a-comin' back no mo', Huck."
I says:
"Why, Jim?"
"Nemmine why, Huck—but he ain't comin' back no mo."
But I kept at him; so at last he says:
"Doan' you 'member de house dat was float'n down de river, en dey wuz a man in dah, kivered up, en I went in en unkivered him and didn' let you come in? Well, den, you kin git yo' money when you wants it, kase dat wuz him."
Tom's most well now, and got his bullet around his neck on a watch-guard for a watch, and is always seeing what time it is, and so there ain't nothing more to write about, and I am rotten glad of it, because if I'd a knowed what a trouble it was to make a book I wouldn't a tackled it, and ain't a-going to no more. But I reckon I got to light out for the Territory ahead of the rest, because Aunt Sally she's going to adopt me and sivilize me, and I can't stand it. I been there before.
THE END. YOURS TRULY, HUCK FINN.